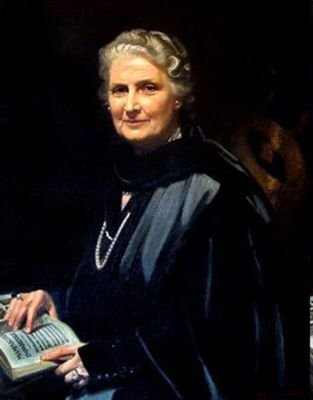 Maria Montessori was born on August 31, 1870, in Chiaravalle, Italy.  A trailblazer from the start, young Maria broke through gender barriers and pursued a technical education with the intent of entering the engineering field instead of studying the classics as most young women did in her time.  With the assistance of Pope Leo XIII, Montessori became the first woman to enter medical school in Italy, and in 1896, she became the first female doctor in Italy.

In 1898, Dr. Montessori gave birth to her son Mario, who carried on her legacy after her death.

After working extensively with children with mental disabilities, Dr. Montessori was commissioned by building developers in the rapidly-growing city of Rome to keep the children of workers occupied during the day.  In the San Lorenzo district, Dr. Montessori’s first children’s house, or Casa dei Bambini, was established in 1907.  She brought many of the educational materials that she developed when working with children with mental disabilities.  In 1914, Dr. Montessori wrote, “I did not invent a method of education, I simply gave some little children a chance to live.”

As her approach to education rapidly spread internationally, Dr. Montessori traveled around the world to train teachers to guide the young child.  In 1929, she established the Association Montessori Internationale (AMI) to uphold the high standards of her educational method.

I did not invent a method of education, I simply gave some little children a chance to live.”

Dr. Montessori traveled with Mario to India in 1939 for a training course and a series of lectures but were interned there upon the outbreak of World War II as both Dr. Montessori and Mario were Italian citizens. During their seven years in India, they trained over 1,000 teachers and met Mahatma Gandhi and Jawaharlal Nehru (the first Prime Minister of India).

Dr. Maria Montessori passed away on May 6, 1952 in the Netherlands.

In the classroom
Additional readings on Dr. Maria Montessori